After a pained two-year delay plagued with safety issues and malfunctioning equipment, the initial stage of the Seattle Alaskan Way Relocation Project concluded April 4th, 2017. Bertha, the 6,700 ton tunneling machine broke through ground, completing the first section of the project. Brought in to forge the now-completed tunnel, the removal of Bertha was next on the Washington State Department of Transportation’s agenda.

As seasoned heavy haulers, Nelson Trucking Company, Inc. partnered with Hitachi-Zosen, the machines manufacturer, to haul the remnants offsite to Seattle Iron and Metals for recycling. Bertha was cut into manageable pieces and pulled out at various angles. Nelson’s fleet of trucks hauled piece by piece, removing the final section August 25th 2017.

As Seattle’s landmark project commences to the second stage, Nelson Trucking Company, Inc, is excited to be a part of this groundbreaking process. Through their 100 years in transportation, Nelson has helped shape Seattle skylines, and now all the way underground below the city. The team is proud to be part of this historic venture in Seattle, Washington. 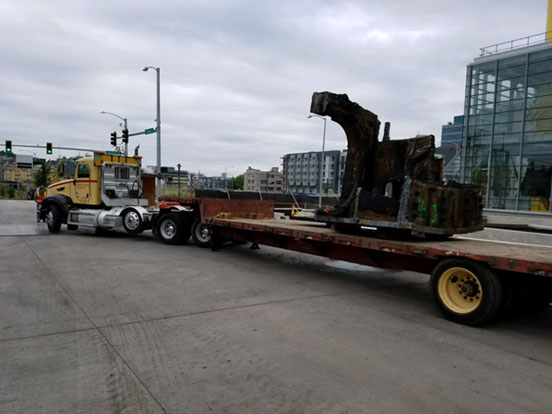 Drone Footage of the Tunnel from the WSDOT YouTube page